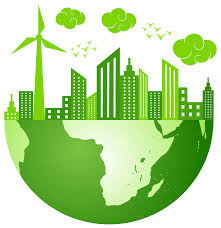 Businesses are increasingly substituting internal resources to outsourced, cloud-based services.  This is to exploit the wide range of benefits offered such as rapid capacity scale-up/scale-down, pay-as-you-go pricing.  As well as access to cloud-based applications and services.  Also avoiding the capital costs of buying and managing on-premises infrastructure.

But we’ve heard little so far about the efficiency and green attributes of cloud computing. That is starting to change as we hear from cloud service providers about the architecture and energy requirements behind their cloud infrastructure, and as we start to analyse customer implementations of cloud resources vs. on-premises alternatives.

Cloud infrastructure addresses two critical elements of a green IT approach: energy efficiency and resource efficiency. Whether done in a private or public configuration, cloud computing will be greener for the following reasons:

From a resource efficiency perspective, less equipment is needed to run the same computing workloads compared to an on-premises server deployment.  Resulting in less physical space and a reduced carbon footprint.  From an energy efficiency perspective, with less physical equipment, a data centre will consume less electricity again, reducing the carbon footprint. As well as virtualisation, associated sophisticated server management software also drives up resource and energy efficiencies.  Ensuring the data centre runs at peak optimisation, less physical infrastructure is needed.  In turn this maximises the energy and resource efficiencies from server virtualisation.

The pay-as-you-go nature of cloud-based infrastructure encourages users to only consume what they need and nothing more.  Combined with the cloud’s self-service capability, life-cycle management will improve since users can consume infrastructure resources only when they need it, and ‘turn off’ resources when required or with set expiration times.

At the same time, the pay-as-you-go and self-service capabilities of cloud-based infrastructure drive energy and resource efficiencies simultaneously, since users only consume the computing resources they need when they need it.

By combining demand patters across many organisations or business units, the peaks and troughs of computing requirements flatten out and the ratio between high and low loads becomes smaller which, in turn, reduces the need for additional infrastructure.  The result is substantial efficiencies and economies of scale in energy use and infrastructure resources.

In summary, migrating IT workloads to the cloud or establishing new workloads in a Cloud environment can help an organisation contribute to energy-efficiency and sustainability goals.

It is estimated that by 2020, energy savings of $12.3 billion and carbon reductions equivalent to 200 million barrels of oil can be achieved in the US alone.  This is all thanks to Cloud Computing.

A further study by management consultant Accenture, concluded that every 100-person company using cloud-based applications will reduce energy consumption and carbon emissions by up to 90%.

Cloud Computing is directly responsible for the online economy becoming so dominant.  As a result, it has made it possible to save more of the planet’s resources.  Resource consumption has been reduced, because more organisations are using the Cloud.

Due to the online economy, the rise of physical stores and offices has also decreased.  This inevitably has reduced demands on resources.  Examples worth mentioning are online document storage that has put a big stop to deforestation.  Also, mobile and internet technologies which have reduced physical travel.

Find out how cloud computing cannot only reduce your carbon footprint, but also enhance your businesses operation performance and competitiveness